Ever since the World Cup started every one started talking about the Vuvuzelas which were plastic blowing horns which made a very loud noise. BBC and ITV managed to turn them down during the match’s but Ireland’s national channel RTÉ had them and it was difficult to hear what the people were saying. I hear they were selling Vuvuzelas like mad in South Africa to plenty of people from numbers of different countries. Will that mean they will be used in league games next season in the likes of the Premiership etc. I hope not because it will drive people up the wall! I don’t see them being used in the premiership because people that pay for season tickets wont want to be listing to someone blowing a horn for the season.

Even the likes of Youtube are after putting a Vuvuzela button on every video so you can play it while watching if you wish. Someone tell me whats the point in that? If you want to watch a video on a site you will be wanting to hear the sound I think and now a horn in the backround. Also it has been one of the most talked about topics on Twitter in the past two weeks, so if you mention the word Vuvuzela other people that tweeted it will see your name so you have a great chance of getting more followers. Maybe try it and see if it works!

They are used in every football match which is held in South Africa so maybe it is a nice touch seeing the World Cup is being help there but I hope it isn’t taking over board by being brought around Europe and played in the likes on the Champions League.

I think this has been one of the most asked questions this month but we want to hear what you think about the Vuvuzelas? 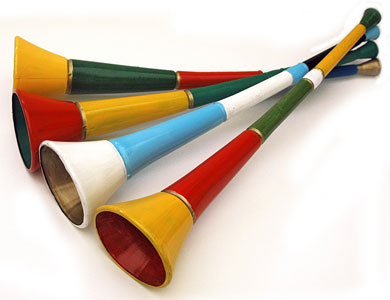